By coincidence, a friend of mine called me yesterday for consulting on an office project she is working on and the style of it is the Mad Men offices for 2010.... she read yesterday's post... ha! I had to do a little research so I could get some of the signature piece just right... 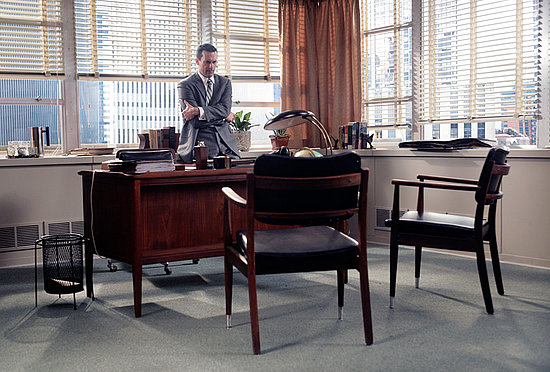 Don Draper in his luxurious corner office
Even though today's offices are not as big and luxurious as the ones in the 1960's I was able to point her in the right direction to get the feeling of the show and the masculine style of the workplace. First was to get the exact same office used in the show by looking at a couple of videos,to find out it's an Eames Executive chair. The desk was a more difficult task but I though maybe that I could reinterpret  the one on the show for one that has the same configuration and details but with modern materials.

Homework Desk by Bensen of Vancouver (image credit)
For guest chairs it would be nice to have something that keeps he same clean curvy lines as the ones in the office photo but also that softens the look of the desk and go with the desk chairs.

Carson Chair by Bernhardt Design
During my research I was able to find that the set designer of the show had the lounge furniture made at a store in LA called Futurama. The pieces have a wood frame/shell and a soft padded interior on top of a steel base giving them a very similar look to a famous Florence Knoll piece. Don and Roger enjoying an afternoon drink while talking business... (image credit)
Finally you cannot work without some accessories that make the desk look fantastic and so I found them. They are leather and also have that manly-man feeling but still look very elegant. Of course it needs the perfect desk lamp to finish dressing up the desk.

AJ Table Lamp by Louis Poulsen (image credit)
Some of you commented that you don't watch the show and I strongly recommend it not just because of the good looking people but also because visually is so well designed and the things it talks about like feminism, office politics and the era of the "perfect gentleman" (please note quotation marks). If you want to catch up you can visit the website and look at the videos.
Have a fun day, especially at work!