Call me traditional or a purist but I believe Valentine's day is a day fro chocolate in any of its many forms. If I was in the chocolate business I would wait for February 14th with great anticipation and see my bank account grow tremendously {there's a business idea!}. 
But business aside, chocolate has been historically an aphrodisiac because of its smell and the role it plays in the release of pheromones in our bodies. It is believed that the ancient Mayas and Aztecs believed this to be true and was adopted by Spanish conquistadors who brought the cocoa seeds to Europe... as you can imagine, this delicious flavor spread quickly throughout the old continent! Those of you celebrating with a special someone and are thinking about having dinner at home, maybe you you can start your the night by making your chocolate dessert first, that way you do something delicious together that you can enjoy later... Hmmm!!! 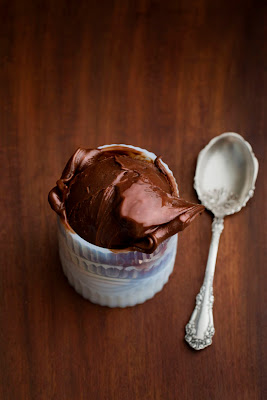 
Personally, I'm an ice cream / chocolate cake kind of girl and proud of it! I believe there is something very satisfying in enjoying chocolate in its purest form. Anyways, hope you get some ideas for tomorrow or if you're giving up sweets for Lent, then I apologize for your terrible craving for some dark deliciousness!

Have a sweet day!